Stephen Broden: The Obergefell Decision Shifted America Away From Biblical Morality — What Are We Going to Do About It?

Pastor Stephen E. Broden May 29, 2019 Clergy Corner Comments Off on Stephen Broden: The Obergefell Decision Shifted America Away From Biblical Morality — What Are We Going to Do About It? 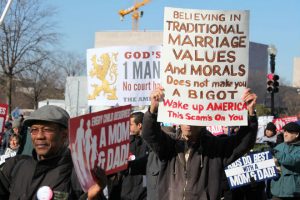 On June 26, 2015, traditional values took a significant hit and began a slow death towards irrelevancy. The Supreme Court’s decision in the Obergefell v. Hodges case redefined marriage in America to include same-sex unions. In western civilization and the third world, marriage was always between a man and women. SCOTUS set in motion with its pivotal ruling a neo-morality that redefined our nations view of right and wrong.

Obergefell codified into society what was once unacceptable and immoral. The legitimization of same-sex marriage was the beginning of a significant cultural shift away from biblical morality and God’s definition of marriage. This decision opened the door to Pandora’s box of moral confusion and a public reversal of right to wrong and wrong to right.

The philosophy behind this shift is sourced in godless human secularism. The ambition of this ideology is to replace the influence of the divine with an atheist worldview. This worldview positions Darwinism, socialism, and communism as best for 21st-century man.

The latest push to transform morality in America is Nancy Pelosi’s priority of the “Equality Act,” and Congressman John Lewis drives to pass “Every Child Deserves A Family Act” (ECDFA). The “Equality Act” will legalize lifestyle choices as a protected class. If this bill passes the Senate and is signed into law, homosexuality, transgenderism, and gender fluidity will be protected by law and positioned in society as usual, acceptable behavior.

The ECDFA is even more heinous, as it will allow same-sex couples to adopt children legally. This bill will attempt to normalize same-sex marriage without regard to the adverse impact it will have on the mental health of children exposed to the unnatural union between same-sex couples.

It is very telling that these legislators have made their priority the advancement of legislation to facilitate transforming the moral character of America. What was once considered immoral is now embraced as usual, acceptable behavior. Our nation is facing monumental challenges — illegal immigration, political corruption in the FBI, Department of Justice, the CIA, and other intelligence agencies, to name a few. Government gridlock is amplified by an adversarial conflict between the Executive Branch and the House of Representatives. What is particularly painful to observe is the depth of dysfunction in the black community with our families, education, and spiritual demise.

The question the black community should be asking of John Lewis is this: Who are you serving? Congressman Lewis’s misguided leadership has prioritized immorality above the needs of the black community. Nancy Pelosi with the same priority is pushing an immoral agenda as an agent of the LGBTQ agenda. Our moral values as a nation are shifting away from its Judeo-Christian heritage.

What are we going to do about it?

Stephen E. Broden is the senior pastor at Fair Park Bible Fellowship, founder of Protect Life and Marriage Texas, and member of the National Black Prolife Coalition. He is the chairman of the Gone 2 Far Movement.

Previous Angela Stanton-King: Voting Against Our Interest is a Dangerous Game
Next Ken Blackwell: Shielding America Against Geopolitical Energy Shocks