BCN Senior Editor May 6, 2019 U.S. News Comments Off on The Trump Administration Might Crack Down on LEGAL Immigrants Receiving Taxpayers’ Money 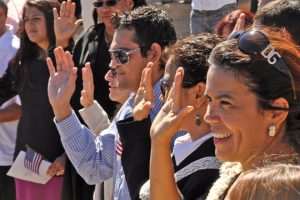 Reuters reported that it has seen U.S. Department of Justice draft regulations that would crack down on legal immigrants who collect welfare.

Foreigners who wished to live in the United States had to prove they could support themselves. These days, millions of immigrants, legal and illegal, receive money from tax-paying citizens. The Trump administration seeks to correct this practice by expanding the categories of who could be deported for collecting welfare. From Reuters (emphasis added):

U.S. law allows for the deportation of immigrants who have become “public charges” within five years of admission if their reason for seeking help preceded their entry to the United States – for example, if they had a chronic health condition that was not disclosed.

The draft rule indicates the government would override that precedent to allow for deportation of some permanent residents who have used certain public benefits within five years of admission.

Immigrants receiving disability, food stamps, Section 8 housing, Medicaid, or Temporary Assistance for Needy Families would be under scrutiny for deportation.