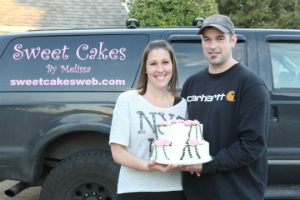 Christians Aaron and Melissa Klein, the bakery owning couple who declined to bake a cake for a homosexual “wedding,” formally announced that they’ve closed their business, Sweet Cakes.

Although the Kleins, who have five children, previously served the women, that wasn’t enough. These customers cared nothing about her faith. The homosexual lobby wants total compliance. Submission. From the Catholic News Agency:

“We have closed Sweet Cakes,” the bakery said on its Facebook page Sept. 29. “We appreciate everyone’s continued prayer and support!”

The announcement did not give further explanation for the closure. Its storefront in Gresham, Oregon was closed in 2013 but the owners, married couple Aaron and Melissa Klein, had continued to operate at home, Portland’s Q13 Fox News reports.

Hiram Sasser, deputy chief counsel for the First Liberty Institute, the legal group representing the couple, said they closed the bakery “months ago” but they still received inquiries about possible orders.

“Aaron and Melissa simply wanted to update their Facebook page to eliminate any confusion,” Sasser said. “We believe in tolerance and respect for the variety of beliefs we have in our society and are hopeful we can restore freedom of tolerance and belief in this case.”

The women could have gone to a different bakery, but they chose to be vindictive and make an example of the Kleins.

The Kleins’ attorney, Hiram Sasser, said it is “unfortunate the state of Oregon cannot simply leave people alone when it disagrees with their beliefs. America is a multicultural society with people of many different beliefs. The government is demanding everyone believe the same thing rather than tolerating the diversity of ideas and lifestyles that represent American multiculturalism.”