This Is Not A Tragedy 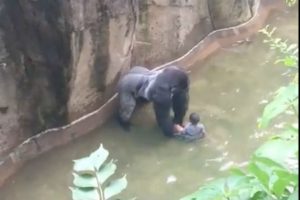 A gorilla has taken control of your TV set.

What an apt metaphor for the past year. In fact, of course, I refer to the actual gorilla that was (if you take the word of some of the more unhinged commenters on social media) “assassinated” by zoo officials in Cincinnati.

I nearly wrote “who,” but that would be to commit the error so many are making in this case — confusing animals with people.

To recap: A family visited the gorilla exhibit over Memorial Day weekend. A 3-year-old child managed to slip into the gorilla enclosure while his mother was distracted.

Zoo officials explained that under these circumstances, they could not risk attempting to tranquilize the animal, because 1) tranquilizer darts take time to work; 2) the dart could have angered the ape; and 3) it would have taken only a matter of seconds for the gorilla to kill the child.

One criticism of the zoo seems entirely sensible and understandable: Why was the enclosure not childproof? At every zoo I’ve visited, visitors are kept safely away from dangerous animals. So if the fence wasn’t secure enough to prevent a 3-year-old from squeezing through, someone should lose his job. Thank God a tragedy was averted by the quick action of zoo officials, who did the only thing they could do by shooting the gorilla (and good shot, by the way), but it could have been much worse.

But wait. In an avalanche of moral confusion, many people seem to have their heads screwed on wrong. The death of the animal — a shame, to be sure — is being called a “tragedy.” Oh, yes, the White House spokesman himself said so. A string of silly celebrities wailed that the gorilla had been killed due to poor parenting. Actor Trevor Donovan tweeted, “’17 yr old Harambe the gorilla was shot dead after boy falls into Ohio zoo enclosure’ Where were the parents?!”

Donovan must not have children. Those of us who do are aware that as watchful as we are, children can still put themselves in danger sometimes. Where are all these parenting police when parents do truly awful things, like giving their children drugs, or guns, or letting them watch TV 10 hours a day? I have no idea whether Michelle Gregg, the boy’s mother, is a good parent or not, but I do know that the fact that he was out of her sight for a few seconds doesn’t answer that question.

Actress Kaley Cuoco posted, “Once again, another animal being killed over people not using their brains. If you watch the footage, you see this gorgeous animal holding the child’s hand. Do with that what you will.” Here’s what I do with it: I look at what happened after the first few seconds. Harambe, the 450-pound male gorilla, at first treated the little boy gently, but then, perhaps agitated by the crowd’s cries, dragged the child by the ankle through the water and into another section of the exhibit. The boy’s head was banging on concrete. It was not a scene from “Curious George.”

An online petition calling for “Justice for Harambe” has received 100,000 signatures. CNN informs us that the name Harambe is Swahili for “come together for a common cause.” And the Cincinnati police are reportedly investigating the little boy’s family. “Cincinnati police said Tuesday that their review will focus on the actions of the boy’s parents and family,” CNN reported. “It is not related to the operation or safety of the Cincinnati Zoo, authorities said.” Well, that’s completely backward.

Concern for animal welfare is not decadent. Some serious people argue that zoos and aquariums are inherently cruel, and they deserve a hearing. What’s so off about the reactions to this sad tale is the confusion about who has moral standing. “Justice” is not something to which animals are entitled, because animals are not moral agents. Those demanding “justice” for a gorilla are saying something nonsensical. Suppose the gorilla had climbed out of the enclosure and grabbed the boy? Would his advocates demand that he be tried for assault? Of course not. The gorilla cannot be held legally or morally liable for his actions because he is a dumb beast. By the same token, he cannot receive “justice” from anyone. Animals can and should be treated humanely not because they are humane but because we are.

Previous To the Uninformed: Why Socialism Is A Big Disappointment
Next StemExpress Under Fire — Will the Obama Administration Investigate?