This is Why the Leftist Mainstream Media Deeply Love Disruptive Walkouts 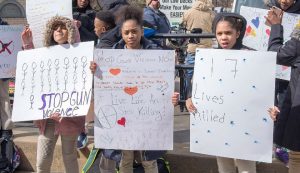 The leftist-organized wave of school walkouts on March 14 to protest gun violence is a classic example of the way protests are categorized by our news and entertainment media.

1. Liberal protests are authentic cries from the grass roots; conservative protests are “Astroturf.” How homegrown were these liberal walkouts? They were organized weeks ago by the Women’s March on Washington leftists. Liberal parents forced school administrators to knuckle under and allow the walkouts without punishment. They were supported by passionate media coverage and media conglomerates like Viacom, which dedicated 17 minutes of airtime to show solidarity. So, was this organized political activism? Helaine Olen at The Washington Post noted a bunch of this activity and then claimed that the idea that students were being “manipulated by greater adult left-wing forces” is “conspiracy theorizing” and “absurd.”

1a. This week’s corollary: Liberal protests by children, organized and promoted by adults, are to be celebrated as child-generated. But conservative children going to a protest are uneducated robots influenced by their ministers or parents.

Who are these kids anyway? The Washington Post celebrated the walkouts with the front-page headline “We’re the Next Generation.” Liberals represent everybody. We are the world and all that.

But when tens of thousands of teenagers attend the March for Life across the country, the national media ignore them — unless it’s to expose the nefarious nature of those Christian zealots. In 2017, the media site Vocativ found Catholic young adults who felt they had been used. “I was in 5th grade when I started going to the march,” Miranda O’Shea complained. “At that time we barely even knew what an abortion was, let alone the real meanings behind it.” Another woman said: “I really feel for the kids under 18 that get bussed in. I don’t really think they should go to the event until they’ve reached a point where they can decide if they want to go.”

2. Liberal protests are newsworthy because they’re disruptive; conservative protests are too orderly to be worth discussing. The news angle with the gun protests was the disobedience involved in walking out, something to be celebrated. Leftist protests demand police activity because leftists break stuff, and they demand to be arrested because it somehow makes them heroic. One hundred thousand conservatives could show up on the National Mall in our nation’s capital and not leave behind so much as a candy wrapper on the ground. Bo-ring.

3. Finally, liberal protests are somehow not political. When co-host Meghan McCain stated the facts on these marches on “The View” — a show that advocates passing gun control legislation and sticking it to the National Rifle Association — Whoopi Goldberg was outraged. She said: “Let’s stick to what this particular march is today. … It’s not political.” What will Whoopi claim next? That “The View” isn’t political either?

The Women’s March organizers of this walkout wanted to protest not just gun violence but also racism, police brutality and how “the United States has exported gun violence through imperialist foreign policy to destabilize other nations.” That’s superpolitical.

This whole process — liberal reporting followed by liberal protests — is one organized political campaign. The media start the outrage machine, demanding a liberal course of action, and the protests are organized to keep the story fresh by taking the demand for action to the streets.

Any political analysis of this modus operandi leads liberals to make bizarre arguments, as if the protesters represent the entire public and their agenda is so universally supported it’s no longer political. This gaseous bubble must be popped by conservatives for what it is: “fake news,” not facts.