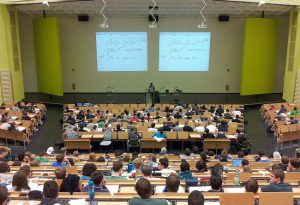 “It’s time for enlightened America to hit reset on affirmative action once and for all,” writes Columbia University linguistics professor John McWhorter in The American Interest. By affirmative action, of course, he means the racial quotas and preferences that most selective college and university admissions departments employ.

“The reason America can never truly come together in understanding racial preferences is not benighted racism rearing its head as always,” he goes on. “It’s because the rationales simply no longer make any damned sense.” Forty years ago, they were arguably needed to reverse anti-black discrimination. Today, beneficiaries tend to come from upscale households or immigrant families never subject to discrimination here.

The weakness of the case in favor of racial quotas and preferences — which are literally racial discrimination, otherwise banned by the 14th Amendment and the 1964 Civil Rights Act — is illustrated in a Washington Post column by the thoughtful liberal Charles Lane subtitled “why restart the war?”

Lane doesn’t bother to defend this form of racial discrimination as a good thing. He just says that Donald Trump doesn’t oppose it and most of his voters don’t particularly care about it. On this issue, unlike many others, he’s ready to accept Trump’s and his followers’ priorities.

Our four most recent presidents, like eight of their predecessors, earned degrees at Harvard University or Yale University (both for George W. Bush). Our history has been far less blighted than Asia’s or Europe’s by resentment at or persecution of what Yale Law professor Amy Chua calls “market-dominant minorities.” Americans don’t much mind people of unusual ethnicity earning success by merit, whether in the National Basketball Association or in Nobel Prizes.

But pushing the case against racial quotas and preferences is the increasingly glaring contest between elite institutional practice and constitutional principle. “Governmental use of race must have a logical end point,” then-Justice Sandra O’Connor wrote Grutter v. Bollinger, allowing racial preferences at the University of Michigan Law School. “We expect that 25years from now, the use of racial preferences will no longer be necessary to further the interest approved today,” That was in 2003. Ten years left to go.

For me, the clinching argument against racial discrimination in admissions is not how it hurts Asians or, to a much lesser extent, whites, but how it hurts the intended beneficiaries. As Richard Sander and Stuart Taylor showed in their 2012 book “Mismatch,” and as subsequent research has confirmed, black and Hispanic students who are less well-prepared than their schoolmates tend to struggle with instruction pitched to others more advanced, and are more likely to shun science and tech courses and drop out without degrees.

The case for racial quotas and preferences rests heavily on the notion of “disparate impact” enunciated by the Supreme Court in the 1971 case Griggs v. Duke Power Co. The justices, familiar then with how Southern segregationists dissembled and disguised racial discrimination, ruled that differences between whites’ and blacks’ performance on seemingly race-neutral tests is evidence of illicit discrimination.

Similarly, as McArdle notes, segregation imposed by state law and sanctioned violence was still familiar when the Supreme Court allowed racially discriminatory admissions for “diversity” in Regents of the University of California v. Bakke in 1978. That was 40 years go.

The fact is that a society as diverse and dynamic as America always has been and will have disparate impact of all kinds, sometimes the result of racial, ethnic or religious discrimination, more often the result of diverse interests, traditions, goals and skills. Trying to get the racial and ethnic balance in every occupational and educational group reflective of the total population is a fool’s errand.

Racial quotas and preferences have fostered a culture of dishonesty in higher education. Time to junk them and just be fair.