Wake Up, Be Vigilant, and Fight Back Against Liberal Thought Police!

David Limbaugh May 1, 2017 Contributors Comments Off on Wake Up, Be Vigilant, and Fight Back Against Liberal Thought Police! 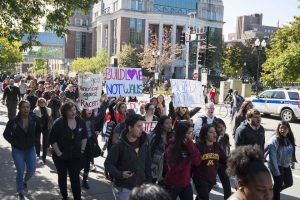 The totalitarian left is emboldened by its selective suppression of speech. Just as scary is the deluded thought process that inspires its Stalinism.

Recognizing its inability to compete in the marketplace of ideas, the left has been chipping away for years at the concept of free speech. You have to give leftists points for cleverness, not to mention persistence, because they don’t openly advocate censoring conservative speech as such. They pretend to be protecting some greater good or preventing imminent harm to certain groups.

When they failed in talk radio, they resurrected the Fairness Doctrine, which is euphemistically disguised as a policy to ensure the presentation of all viewpoints but is actually a sinister ploy to dilute the power of conservative talk. They always have some excuse — and plausible deniability.

They protest conservative speakers or those easily demonized as conservatives on college campuses, arguing that conservative “hate speech” can lead to violence against certain groups. No one wants violence, so we must muzzle conservative political speech, right?

But it’s patently absurd to contend that everyday conservative speech is “hate speech” and that it leads to violence. It is pernicious nonsense. What’s worse is that these speech cops don’t acknowledge their own hypocrisy in committing violence — the very harm they claim to be preventing — to prevent speech that allegedly could lead to violence. Let’s just burn some buildings down and smash some skulls in to show just how adamant we are about preventing violence. I wish I were exaggerating.

But the thought control zealots are now coming up with even more bizarre rationalizations to curb competitive speech. In a recent New York Times op-ed, New York University provost Ulrich Baer argues: “The idea of freedom of speech does not mean a blanket permission to say anything anybody thinks. It means balancing the inherent value of a given view with the obligation to ensure that other members of a given community can participate in discourse as fully recognized members of that community. Free-speech protections — not only but especially in universities, which aim to educate students in how to belong to various communities — should not mean that someone’s humanity, or their right to participate in political speech as political agents, can be freely attacked, demeaned or questioned.”

You may consider that to be psychobabble. What would you expect from an academic who describes himself in the same piece as “a scholar of literature, history and politics”? But I digress.

Let’s try to decipher what he’s saying. To do so, we must understand that like so many leftists, Baer cannot avoid viewing these matters through the grid of identity politics; everything must be evaluated in terms of how it affects minorities or historically oppressed groups.

Even though one could define unfettered freedom of expression as “guaranteeing the robust debate from which the truth emerges,” we shouldn’t support it, Baer also says in the piece. Specifically, we shouldn’t protect speech that insults whole groups in an effort to discredit and delegitimize them “as less worthy of participation in the public exchange of ideas.” He seems to be saying that if you discredit groups of people with your speech, then you unlevel the playing field to the point that any speech these groups express will be less valuable and effective.

We must weigh the “inherent value” of ideas against the dangerous possibility that these ideas could discredit other groups and thereby effectively silence them, he says. Thus, a “pure model of free speech” presents a “clear and present” danger to our democracy.

So the republic is better-served if we allow certain ivory tower elites, with their worldly wisdom, to weigh the “inherent value” of speech to determine whether it should be protected. If it arguably demeans a certain group — and there are newly defined groups all the time in the left’s world — it is not worthy of protection.

Thus, the liberal thought police can decree that because anything conservative firebrand Ann Coulter would say at Berkeley on immigration or other topics would diminish other groups, it should not be protected. She’s a conservative, and conservative ideas don’t have much inherent value to liberals and, in their distorted world, also discredit certain groups. Voila! Shut her down. The sophistry is astounding.

I urge you not to miss the most stunning aspect of Baer’s specious analysis. The thrust of the left’s message against conservatives across the board is that because of our toxic ideas, we should be discredited and delegitimized “as less worthy of participation in the public exchange of ideas.”

Just as leftists support the commission of violence in the name of preventing speech that could arguably lead to it, they would muzzle us because through our speech, we would discredit and then effectively muzzle them. Insanity.

We don’t want to muzzle liberals; we want to defeat them in the marketplace of ideas. We don’t want to commit violence against them, but they often want to do so against us. Boy, how they project.

Let me ask you: In their world, who would decide whether certain speech has inherent value? The federal government, no doubt, provided Democrats are in control at the time. The true acid test of Baer’s preposterous arguments would be to ask how liberals would feel if Republicans were allowed to make such decisions while in control of the federal government. How would they feel if a conservative had written this silly, scary op-ed?

It is precisely because we can’t have certain self-appointed groups deciding what speech is worthy that we must vigorously protect “robust” political speech in this country. The Founding Fathers knew this, and everyone with common sense understands it. But the crazy modern left wants us to unlearn it — and leftists call us conservatives a danger to democracy.

Whatever you do, don’t casually dismiss Baer’s ideas as fringe. This is the way leftists think today — and they are the people teaching our university students, producing Hollywood movies and largely controlling the mainstream media. Wake up and be vigilant! And fight back!

Juneteenth should be a reminder to never see any group of humans as non-persons. It never …