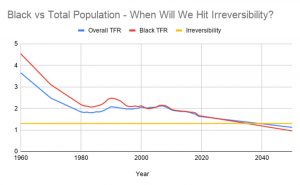 According to The Social and Economic Status of the Black Population in the United States: An Historical View, 1790-1978 (PDF), a statistically reconstructed estimate of the Total Fertility Rate (TFR) for Black women in the 1850’s was about 7.9 births per woman.
In 1950, 100 years later, the total fertility rate for Black women was about 3.6. That’s a 54% decline.
In the 1960s, Black Americans distrusted government and any attempt to limit our population. We feared the motivation behind taxpayer funded birth control clinics was nothing more than a malevolent effort to limit Black Political Power.
At a meeting of the Council of Philadelphia Anti-Poverty Action Committee in 1965, Cecil Moore, president of the local NAACP chapter, condemned a Planned Parenthood program in northern Philadelphia because 70% of the population were Black. Moore labeled the plan as “replete with everything to help the Negroes commit race suicide.”
On January 22nd, 1973, abortion on demand became legal nationwide. Sixty days later in a March 22nd, 1973 Jet Magazine article titled, “Legal Abortion: Is It Genocide Or Blessing In Disguise?,” Jesse Jackson warned: “Abortion is genocide. … Anything growing is living. If you got the thrill to set the baby in motion and you don’t have the will to protect it, you’re dishonest.”
By 1975, two years after the legalization of abortion in 1973, the total fertility rate for Black women fell to 2.3 births per woman.
Today, the Democratic Party and Black leadership in high places, including Jesse Jackson, endorse abortion on demand through all nine months of pregnancy.
A Total Fertility Rate (TFR) of 2.1 represents the Replacement-Level Fertility, or in other words, the average number of children per woman needed for each demographic to exactly replace itself, generation after generation, naturally.
Today, according to the National Vital Statistics Report, Volume 68, Number 13 dated November 27th, 2019, the TFR for Black Americans in 2016 was 1.832.5. In 2017 the TFR for Black Americans 1.824.5. In 2018 the TFR for Black Americans is now down to 1.792.
The news gets worse.
According to the National Vital Statistics Report, Number 008 dated May 2020, the number of Black American births decreased 1% to 547,543 in 2019 from 552,029 in 2018.
The news gets even worse. 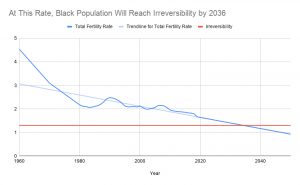 According to the Population Reference Bureau, which is dedicated to informing people around the world about population, health, and the environment, long periods of low fertility rates have an irreversible consequence.
A linear projection reveals that the Black American population’s TFR is projected to go below 1.3 by 2036.
At that point Black America will be facing irreversibility. There is such a thing as “too late.” History has written “too late” on the tombstone of many. Cecil Moore was right. Planned Parenthood’s plan is “replete with everything to help the Negroes commit race suicide.”