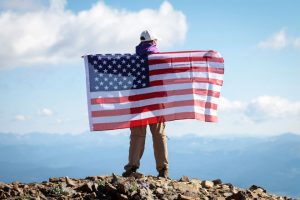 In 1776 a rag-tag group of British colonists met in Philadelphia. Resistance to British exactions had begun more than a decade before. Armed resistance broke out the previous year.

Angry over British restrictions on their liberties and outraged that their mother country was warring against her own people—and had rejected the latest conciliatory petition sent to London—the Continental Congress declared independence. On July Fourth delegates signed the Declaration of Independence, which became one of history’s most recognizable milestones in advancing human liberty.

The Declaration includes some of the English language’s most famous writing: “We hold these truths to be self-evident, that all men are created equal, that they are endowed by their Creator with certain unalienable Rights, that among these are life, liberty and the pursuit of happiness.” Drafter Thomas Jefferson captured the essence of those later known as Americans, while oppressed peoples around the world later turned to the Declaration when calling for their freedom.

However, the document also included a bill of particulars. It not only asserted a right of revolution, but explained why Americans were justified in separating from their colonial parent. To defeat the world’s most powerful nation, the colonists needed allies. Ultimately French support proved critical.

Today we admire the Declaration as historic literature. But at the time it was a profoundly revolutionary document. The 56 men who affixed their signatures were committing an act of treason. If their campaign failed, they could, and likely would, be hung. After all they were instigating rebellion in all 13 colonies. When John Hancock, President of the Continental Congress, affixed his super-size signature, he supposedly declared: “I guess King George will be able to read that.”

With victory they avoided the gallows, but most of them suffered during the war which their defiance made inevitable. One of the signers was seized by pro-British Tories and imprisoned. A number of them served in the military. Four signers were captured in combat. A couple had sons killed or captured in battle.

Many lost homes, businesses, and wealth. Their families suffered. However, the signers believed in liberty and accepted the cost of fighting for it.

Without these brave Americans there would be no United States. We owe our liberty to them.

But the battle is not over. When leaving the 1787 Constitutional Convention, Benjamin Franklin was asked what government had been created. He replied, “A republic, if you can keep it.” We have spent the last 231 years fighting to do just that. Through foreign attack, a terrible civil war, and global conflicts. In the midst of internal divisions, economic crises, and even violent strifes.

The struggle continues. And we are lucky on July 4, 2018 to have President Donald Trump as our champion. As his critics repeatedly point out, he isn’t perfect. But neither are they. Nor even the Founders, who most Americans revere.

Ken Blackwell is a Senior Advisor to Securing America’s Future Energy and a Former Domestic Policy Advisor to the Trump transition operation.