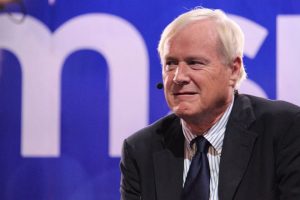 As is often the case in this era of President Donald Trump, the reaction is far more interesting than the action.

The action was rapper/entrepreneur, ex-George W. Bush denouncer and Trump supporter Kanye West, whom Trump invited to the White House. The reaction from left-wing black critics was predictable. But the reaction from a notable Trump-hating white pundit was unintentionally eye-opening. In the Oval Office, West spoke nonstop, and apparently unscripted, for nearly 10 minutes. During his monologue and subsequent questions by reporters, West talked about the pressure blacks face to vote Democratic; how conservative blacks are often bullied by other blacks into supporting the Democratic Party; and how the Second Amendment is unrelated to gun violence, because “illegal guns is the problem, not legal guns.” But most importantly, he spoke about the pain he experienced growing up without a father.

First, the reaction by black critics. Last month, rapper Snoop Dogg called West an “Uncle Tom” — and that was before West’s visit to the White House. After West’s Oval Office monologue, rapper T.I. called him a “Sambo.” On CNN, Bakari Sellers, a Democratic strategist, said, “Kanye West is what happens when Negroes don’t read.” CNN “political commentator” Tara Setmayer called West a “token Negro” and described him as “an attention whore, like the President.” Apparently, Setmeyer forgot about the numerous celebrities, including rappers, who visited President Barack Obama during his eight years in the White House.

Then-Sen. Obama said the same thing in 2008: “I know the toll it took on me, not having a father in the house — the hole in your heart when you don’t have a male figure in the home.”

In regard to West being called a “coon,” a “sell-out,” “self-loathing” and an “Uncle Tom,” Obama also knows a thing or two about that. In 2000, when he ran for Congress against Rep. Bobby Rush, D-Ill., Rush branded Obama as an out-of-touch, not-from-the-‘hood, Harvard-educated elite who taught at University of Chicago and who was not “truly black.” Then-state Sen. Obama, beaten badly in the race, said, “When Congressman Rush and his allies attack me for going to Harvard and teaching at the University of Chicago, they’re sending a signal to black kids that if you’re well-educated, somehow you’re not ‘keeping it real.'” As President, Obama later said: “There’s no one way to be black. Take it from somebody who’s seen both sides of debate about whether I’m black enough.”

Most nights, Matthews and his left-wing cable colleagues scramble to come up with new and different ways to call Trump “racist.” They argue that Trump knowingly and intentionally crafts his message to appeal to white racists. On election night, CNN’s Van Jones attributed Trump’s victory to “whitelash” — claiming that “racist” white voters found a kindred spirit in “racist” Donald Trump. But Matthews, in an unguarded moment, conceded that most whites would not vote for somebody if they thought he or she was racist.

The con has been exposed.

Matthews said, in effect, that most white people are not racist, would not vote for a racist and therefore only a brain-dead white politician would run an election catering to racists. Yet virtually every night, he and his guests preach racism, racism, racism in America.

In fact, Matthews echoes the words of John O’Sullivan, then-editor of the National Review. Sullivan, in 1997, said, “White racism does exist, but its social power is weak and the social power arrayed against it overwhelming.”

Quite the Faustian bargain.

Previous WATCH: This is What Liberals Think of Black Americans
Next Authoritarian and Lawless: Liberals Are Showing Us What to Expect If They Regain a Majority in Congress

In 1955, an unmarried pregnant University of Wisconsin graduate student left her home and traveled …