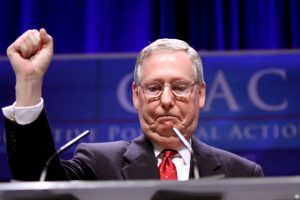 Back in ’92, the late Paul Weyrich and I held a press conference during the Republican National Convention to make two announcements.

First, we were endorsing George Bush 41’s re-election. Second, we’d just made the most meaningless endorsement in history. He had so thoroughly bungled his first term that there was nothing to be done to save him. And we were right.

The Republicans are now facing the same future in November. At this point, they will certainly lose the House and quite possibly the Senate. Worse, they’ve so botched their opportunity that only they can save themselves now. Their $1.3 trillion omnibus bill was not just the most reckless spending bill in history, it was an abject surrender on every single political and policy pledge made to those who put them in office, save helping the military.

It’s been this way from the start. First, they asked for control of the House and its appropriations authority to right the fiscal ship, and as importantly, to end Obamacare. In 2010, they got it — and immediately stated they could do nothing without the Senate. In 2014, they were awarded that, too — and just as quickly declared they could do nothing without the White House. So, in 2016 they were handed that, and with it complete control of the legislative process, but now with no more excuses available.

And what have they done? They surrendered without a fight. Any real advance, be it Justice Gorsuch, regulatory relief, minimal border security, minimal tax cuts or minimal changes in Obamacare, has all been driven by the White House. Congress has done nothing.

Here’s the difference between the two parties. For the past eight years, the GOP has been the party that begins each conversation with, “This is why we can’t do it.” The Democrats begin theirs with, “This is how we’ll get it done.” The crisis for Republicans is so grave that not even a rhetorical shift will save them. Only action, concrete action, might. They must come up with victories.

Here’s what they need to do, in six easy steps.

1. Like it or not, they must wrap themselves around the president to save him from impeachment. This means publicly embracing him as their leader. More to the point, it means supporting everything he puts on the table from here through November, and doing it with brio.

2. Reverse that disastrous $1.3 trillion omnibus. This talk about a revision, or worse, a balanced budget amendment, is the height of hypocrisy and the public’s not going to stand for it. It’s like committing rape and then joining the #MeToo movement. Only tangible results, legislation that reduces the deficit and puts the government on the road to fiscal sanity, will work.

3. Kill Obamacare. Nothing less will do. The public that voted these Republicans in has had it with excuses and half-measures.

4. End the funding of Planned Parenthood. The pro-life movement is leaving the GOP, and for good reason. When Republicans award the operation that proudly massacres more than 300,000 babies annually with $450,000,000 dollars taken from American taxpayers, there’s no difference between the parties.

5. Fund border security. The base will not stomach any more of the GOP’s public displays of affection for Chuck Schumer while denying funds for Trump’s border wall. Promises made, promises broken.

6. Deliver real personal tax cuts. What they came up with last year rewarded big business nicely while excusing nearly 50 percent of Americans from the responsibility of paying taxes altogether. Everyone else was given a small amount of relief. Those were your voters, GOP.

Here is the bottom line. On Sept. 30, five weeks before the election, there will be the need for a new spending bill to keep the government running. Everything listed above can be accomplished in that one piece of legislation. No more excuses. No more punts. No more stalling.

It’s so obvious, really. At this point the GOP faithful are set to make a devastating declaration in seven months: “We gave you complete control, and you not only accomplished nothing, you broke your word on virtually everything. Good-bye.”

And you know what, Republicans? They’re right.

Previous WATCH: Why the Liberal Establishment is Afraid of Free-Thinking Black Americans
Next This Black Conservative Talks About the Left’s Intolerance