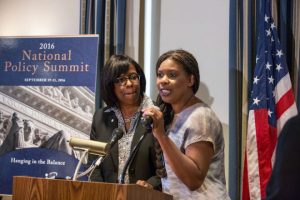 With the Presidency and majorities in both houses of Congress for the first time since 2006, I see a real opportunity to limit the size of government and restore our freedom!

From installing pro-life, strict Constitutionalists to the Supreme Court, to reforming the IRS, reforming welfare, defunding Planned Parenthood, and so much more … THIS. IS. HUGE!

But I also see incredible danger. Already, George Soros‘ paid activists have been able to dominate the media with highly-organized violent protests in cities across the country. His decepetive activists — and the media who follow them while writing fake stories — were able to successfully splash headlines across newspapers and television screens that said people like you and me want to hurt the vulnerable, hurt women, hurt blacks, children and every demographic they can fit into it.

But with CURE’s Black Pastor Network, we have proven that we can stop the lies. Over the past few months through my 10-City Battleground Tour, our media appearances, and our pastor summit where pastors were trained by conservatives such as Kentucky’s Lt. Governor Jenean Hampton and Senator Tim Scott, we were able to reach influential Americans who have never been politically active and mobilize them for freedom!

Our work is needed now, more than ever, if we’re ever going to pass meaningful legisation that limits a government that has grown so large that our existence as a free nation is in doubt.

Despite the fires and fear the left sow as I type this, we must work harder than billionaire George Soros. We must not back down! But we don’t have long.

I look back to 2006 when we lost every opportunity to push an agenda for freedom when Nancy Pelosi became Speaker of the House. So many conservatives asked why Congress didn’t push for real change in the six years they dominated! Let’s make sure no one can ask this question again.

With CURE’s presence in Washington, DC and our growing pastor network, we have a seat at the table to push for policies that protect freedom.

When I see these protesters call for electors to deny Donald Trump the presidency, despite winning the election, or even calling for assassination on social media, I think back to 2008. When Obama won his election, you and I were hurt. But we didn’t march in the streets to hijack democracy. We didn’t burn down our communities. And we didn’t call for him to be harmed.

This is the difference between power-hungry, win-at-all-cost elitists who want nothing but to rule our lives and freedom-lovers like you and me.

With 68 days before Donald Trump is inaugurated, now is the time to invest in freedom. Set-up CURE to make sure policy-makers hear our input and push for a better way for America: for freedom!