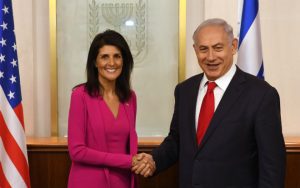 Prime Minister Benjamin Netanyahu again praised both the Trump administration and United States Ambassador to the United Nations Nikki Haley for defending Israel at the General Assembly on June 13.

Haley gave an address in defense of Israel, condemning the U.N.’s anti-Israel efforts after the General Assembly voted in a resolution claiming Israel has used excessive force against the Palestinians of Gaza. The resolution does not mention Hamas after efforts by the U.S. to include condemnation of Hamas in the resolution. Of the 193 members, 120 voted in favor, with eight against and 45 abstentions.

Haley called out the U.N.’s anti-Israel resolution on June 13. “In the face of Hamas terrorists routinely inciting violence, firing over a hundred rockets into Israeli communities, and even attacking the crossing point that brings humanitarian supplies into Gaza, today the UN made the morally bankrupt judgment that the recent Gaza violence is all Israel’s fault. It is no wonder that no one takes the UN seriously as a force for Middle East peace. But the common practice of turning a blind eye to the UN’s anti-Israel bias is changing.”

She however highlighted a shift at the U.N. “Today, a plurality of 62 countries voted in favor of the U.S.-led effort to address Hamas’s responsibility for the disastrous conditions in Gaza. We had more countries on the right side than the wrong side. By their votes, those countries recognized that peace will only be achieved when realities are recognized, including Israel’s legitimate security interests, and the need to end Hamas’ terrorism.”

Prime Minister Netanyahu released a statement through his office addressing the U.N. General Assembly and the U.S.’s support for Israel last Thursday. “Israel appreciates the Trump Administration’s steadfast support for Israel at the United Nations and Ambassador Haley’s strong statement today exposing the hypocrisy of the UN’s bias against Israel. The UN’s incessant focus on Israel not only brings shame to the organization. It also draws attention away from so many other pressing issues that demand the attention of the international community.”

On Gaza he said that “Hamas is responsible for the terrible situation there and for the loss of life and suffering that has occurred as a result of the violent riots it has instigated over the last few weeks. Rather than improve the lives of the people of Gaza, Hamas is using the civilian Palestinian population as human shields in its unremitting terror war against Israel.” He criticized Palestinian Authority President Abbas for making the humanitarian crisis “worse by reducing payments of salaries to Gaza and by refusing to pay for electricity provided to Gaza.”

He confirmed that he would meet with Trump’s special envoys to the Middle East, Jared Kushner and Jason Greenblatt, and U.S. Ambassador to Israel, David Friedman, this week. The officials will discuss “ways to advance peace between Israelis and Palestinians and between Israel and the broader Arab world.”

Previous Here’s Who Benefits from Keeping Black Americans Fearful, Angry, Victimized, and Resentful
Next A Black Conservative Group Calls on Congress and the White House to Help Blacks and the Working Class By Doing This