Palestinian Authority: If the U.S. Does This, It Will Destroy the Middle East Peace Process 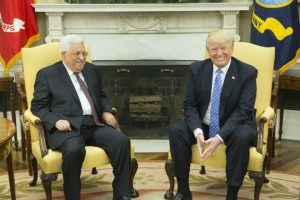 The Palestinian Authority (PA) warned the United States against recognizing Jerusalem as Israel’s capital, claiming it “destroys” the peace process.

PA president Mahmoud Abbas sent a delegation to Washington on Friday to meet with President Donald Trump’s senior advisor, Jared Kushner. During their meeting, senior Palestinian officials Saeb Erekat and Majed Faraj warned the U.S. against moving the U.S. Embassy from Tel Aviv to Jerusalem, as well as against official recognizing Jerusalem as Israel’s capital.

The PA claims Jerusalem should be the capital of a future Palestinian State, but Israel has been consistently clear that no negotiations would be held on changing Jerusalem’s status as the eternal capital of the Jewish State.

The Secretary-General of the Arab League, Ahmed Aboul Gheit, also warned against such decision, claiming that recognition of Jerusalem would lead to violence and only benefits the Israeli government. He stated on Saturday: “Today we say very clearly that taking such action is not justified… it will not serve peace or stability, but will fuel extremism and resort to violence. It only benefits one side; the Israeli government that is hostile to peace.”

The Trump administration reportedly began notifying its ambassadors in the Middle East, with reports claiming the president will make the announcement on Wednesday. President Trump is expected to sign the Jerusalem Embassy Act, a law passed in 1995, to move the embassy from Tel Aviv to Jerusalem. The law can be bypassed if waived by the president every six months.

Dividing people is always easy. All it takes is a lie dressed up in a hashtag. Uniting …