America has a mob mentality problem. And it’s getting worse.

Social media can simultaneously be a great disseminator of factual information and a wretched distributor of #fakenews. For Covington Catholic teenagers, it was the latter. Mainstream media constantly laments that they are called #fakenews, while gleefully spewing it every day. It’s why Gallup reports that 43 percent of Americans have a very/somewhat unfavorable opinion of the news media. It’s even more heightened when you see that 68 percent of Republicans have an unfavorable opinion versus 18 percent of Democrats. Hmmmmm, wonder why?

An inarguably leftist news media refuses to tell the truth about _______. Just fill in that blank. Every year the nation’s most massive demonstration—the March for Life—is virtually ignored by MSM. Yet, the moment unverified allegations of racism from a leftist activist—Nathan Phillips—get posted to social media, MSM can’t talk enough [garbage] about the March for Life. They have a new hook! “White privileged students mock and threaten elderly military vet with racist chants of build the wall!” 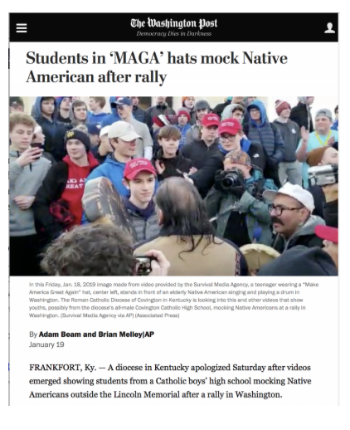 It’s all a lie. But that didn’t stop people—liberals, moderates, and conservatives—from jumping to conclusions. I couldn’t believe all of the condemnation these students (some wearing—gasp—MAGA hats!) received, even from their own school and diocese! None of this is about fighting racism. It’s about cowardice. Our society prefers it when it comes to issues of race. So many are quick to post an ignorant opinion, quick to apologize, quick to assume “white guilt”, and quick to believe every accusation is true. No one wants to be branded a racist, hence the spastic reactions.

Actor Samuel L. Jackson praised Phillips on Instagram and condemned the Catholic teens saying of Nick Sandmann—the student at the center of it all who simply smiled at the activist—#seenthispunksfaceonlynchingphotos. Shaun King, a racialist/columnist and #BlackLivesMatter activist who used to be a pastor, posted: “These students were in DC for their anti-choice march. White men and boys have mocked indigenous people like this for centuries.” Many in the Twitterverse threatened violence.

But who was mocking whom?

Sandmann issued his statement of what really happened. This full video substantiates everything he claims. The students were the ones attacked by other activists with racial and sexual epithets. Self-proclaimed “Black Israelites”, demonstrating at the Lincoln Memorial, spewed their venom at everyone, including other black individuals, calling them “dumb-ass niggers” and “Uncle Tom-aholics.” “You got all these dirty-ass crackers behind you,” they said with the camera pointing at the Covington students. “Look at this sea of demons,” “this is a bunch of future school shooters” the poison continued. “You want us to love you, but the Lord said He had a perpetual hatred. Who is he speaking about? These so-called white people!”

Then Phillips’ fellow demonstrators began hurling hateful remarks, like “Go back to Europe where you came from. This is not your land!” and “America will be destroyed!”

Sandmann, demonized with this pathetic meme, admirably stood still and smiled because he didn’t want to be confrontational. Sixty-four-year-old Nathan Phillips chose to walk up to the kids from afar, confront Sandmann, and beat his drum inches from the teen’s face (here). Phillips was free to leave at any time. He chose to create a scene, and mainstream media created the narrative.

Phillips told CNN that he “put himself into a really dangerous situation.” Sure. Kids having fun shouting school chants is soooooo dangerous. “Here’s a group of people who are angry at somebody else [the only anger came from the “Black Israelite” activists], I put myself in front of that,” Phillips recalled to the anti-Trump network. “And all of the sudden, I’m the one who’s, all that anger, all that want to have the freedom to rip me apart. That was scary.”

Let me get this straight. Kids laughing and chanting cheers was “scary”? They were going to “rip him apart”? Where is the journalistic integrity here? A minority individual simply says something, and it must be true? Funny. I’m a minority, and I can guarantee you that CNN, The Washington Post, MSNBC, or any part of our #fakenews establishment have never treated me with the same regard. But I’m a Bible-believing Christian, black conservative, and prolife—I guess that’s three strikes.

But Phillips is quite the actor (see him in this viral music video) which is almost a prerequisite for being a “progressive” activist. Like the radically anti-Semitic, pro-abortion, anti-male, Women’s March, far-left activists always depict themselves as the victims as they create real victims with their poisonous lies.

This isn’t the first time Phillips claimed he was attacked. He blamed Eastern Michigan University students for being racist, too. And guess what? Local news reported it without a shred of evidence but his own words. He claimed students mocked him as they were dressed in Native American garb at a neighborhood party and physically assaulted him.

On Facebook, Phillips (who is clearly high), talks about being a victim again, spat upon by a “little blond hair, blue-eyed hippie girl” who called him a “baby killer” for serving in the military. “I feel bad because I beat up her boyfriend. I really do feel bad about that. She hurt my feelings,” he recalls as he laughs. He also talks about confronting little children on a little league baseball team because he didn’t like their culturally appropriated name.

No one ever rights the wrongs done to Native Americans in this country by committing more wrongs. Demonizing these Catholic pro-life students by creating dangerous false narratives and never bothering to verify anything only further dehumanizes all of us.

I hate the sin of racism, no matter who it comes from…black, white, or any hue in between.

Previous Make Your State of the Union Speech on Your Own Turf, President Trump
Next What Have Black Americans Gained from Giving Democrats 90 Percent of Their Vote?