WARNING: The Real Power and Purpose Behind the ‘Black Lives Matter’ Movement 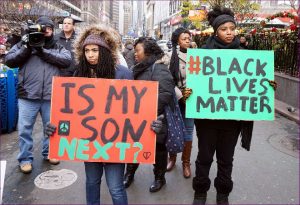 Whatever legitimacy the “Black Lives Matters” (BLM) movement may have is lost in its funding from one George Soros. Mr. Soros is the major financial source responsible for funding the leftist movement in America. (See link for list of left wing organization funded by George Soros. (http://www.discoverthenetworks.org/individualProfile.asp?indid=977). These left-wing groups supported by Soros have one thing in common: to transform America.

Groups like ACORN and Occupy Wall Street are a disruptive influence in our culture and seek to divide and transform our society into a Marxist design. Linked to this disruptive scheme is Black Lives Matters through Soros support and funds.

George Soros’s funding of the BLM movement is part of an integration into a tapestry of organizations used to disrupt and weaken our society to engineer a socialistic transformation. Since the 1920s and 1930s, as presented in Harold Cruse’s book “The Crisis of The Negro Intellectual,” there has been a focused strategy by the Communist party to use the black community and the poor as a battering ram against “the system” for the purpose of fundamentally changing America into a leftist utopia. Their successful efforts in infiltrating the civil rights movement and other legitimate struggles for justice has been well-documented by many historians and scholars recording the history of the civil rights movement in America.

There is an example of how this co-optation has played out in recent history that demonstrates how the left uses black and poor communities to advance their agenda. George Wiley, who was an agent of Richard Cloward and Frances Piven, Marxist professors at Columbia University, formed a group called the “National Welfare Rights Movement” in 1969. This leftist organization exploited the poor with a plan to implement a socialistic strategy to overwhelm New York City’s welfare system. Cloward and Piven’s strategy to orchestrate crisis is evident in the tactics now employed by the BLM movement. Organizers and leaders of BLM are using the same playbook and strategy of George Wiley to advance their Marxist agenda in the public square today. This disruptive strategy is precisely the predominant influence manifesting itself in the “Black Lives Matter” movement across America. BLM is being aggressively manipulated by the left with funds from Soros in order to force a radical change in how local policing is done in America. Through overreach and the expansion of centralized systems controlled by Washington, D.C., the left is attempting to control local policing. This evil manipulation of black and poor communities is a common strategy that has been used successfully in the 70s, 80s, and 90s to advance their ultimate goal of “fundamentally transforming” America.

David Horowitz in his book “Breaking The System” write that “the left’s strategy called for a cadres of aggressive organizers to create street actions by the poor that would create a climate of militancy.” This “cadres of aggressive” community organizers are studied in two ideas, one developed by Saul Alinsky in his book “Rules for Radicals,” and other by Richard Cloward and Frances Piven in their now famous philosophy called “Crisis Strategy.” Horowitz suggested that climate of militancy will cause fear of racial violence which will pressure politicians to cave in to the demands set forth by the leftist who are leading these movements. These community organizers who are prominently positioned in the Black Lives Matters movement are committed disciples of Cloward and Piven and Saul Alinsky.

What we are witnessing in the BLM movement in simple terms are the deliberate efforts by the liberal progressives in America under the influence of Marxism to infiltrate and manipulate the black community. What’s behind their dastardly plan is to replace capitalism with socialism and to ultimately remove the influence of our Judeo-Christian heritage from the public square. These “aggressive community organizers” are fanning the flames of discontentment. By co-opting a legitimate issue related to stranded relationship between the community, local police,and police intimidation, they are using discontentment to advance their agenda. They are stirring passions into “a climate of militancy” and at the same time alienating race relationship in America.

The old adage “divide and conquer” is playing out right before our collective eyes. The plan is a simple one — weaken America and then change her. The leadership of BLM is fully aware of this scheme; however, the average participants (the foot soldier) in the movement are oblivious to this highly sophisticated, exploitive, and manipulative strategy.

The concern for the community is not the motivating reason why these Marxists are involved in this movement. The leaders of the BLM movement are careful to maintain a narrative that is devoid of the major issues adversely impacting black communities all over this country. High unemployment, gang crime, black-on-black homicide, the failure of government schools to prepare our children for a 21st century economy, and the number one killer of black people: abortion on demand. It is disheartening to see how leadership in the BLM movement have bought into this Marxist deception and refuse to address these issues, especially abortion and its devastating impact on our babies and women. Black Lives Matter’s refusal to confront the biggest provider of abortion in the black community that perpetrates the mass murder of our babies, — Planned Parenthood and its partners in death the abortion industry — is very telling about their concern for the community. These merchants of death have destroyed over 35 million black babies since 1973 and have psychologically scared thousands upon thousands of black women for profit. More black babies are aborted than any other ethnic group in America. And what’s not reported to the black community is that when we hear of Planned Parenthood selling baby parts for profit, most of those babies are our black babies! Where is the outrage from these so called leaders?

The socialists and Marxists leading BLM are unconcerned with these very real issues in our community. The refusal to address what has been historically and empirically documented as a eugenic plot to demographically demolish black and minority communities (abortion) across this globe is simply unacceptable. In addition, I find it hard to be believe the systematic dismantling of the black family through government overreach and nanny state intrusion into our families escape their notice.

That Marxist manipulators who lead the BLM movement seem more than happy to take funding from the likes of George Soros and betray the best interest of our community in order to achieve their desire to divide and conquer our beloved nation is nothing short of evil.

It will be the black church as the prophetic voice of God to stand up and stop this Marxist takeover of our community’s fight for a more perfect union. Pastors and spiritual leaders must lead the way in this fight for justice as well as the fight against Marxism. There must be a collective community push-back against this godless movement facilitated by Marxists seeking a dark and dastardly transformation of America.

The deception is an old design sourced in Marxist/Lenin doctrine. Lie, divide, and conquer. Lenin was so bold as to call the poor and others of the proletariat class “useful idiots” necessary to accomplish their Marxist utopia. The church cannot remain silent as the godless force of progressive liberalism transforms our communities, and our nation.

As a pastor and spiritual leader working for 30 years in the inner city of Dallas, Texas, and as one who fought against abortion and the anti-life community since 1980, I will end my observations with several warnings to those caught up in the rhetoric of the left.

Caught up in their deceptions used to inflame passions on legitimate concerns, especially related to policing in our community:

First, I warn you to ask questions of those who lead the BLM movement. Why are they dismissive of black-on-black crime? Why aren’t they addressing the number one killer of blacks in America: abortion?

Finally, the scriptures gives a description for us of those who deceive: Romans 3:13b-18 “With their mouth they keep deceiving, the poison of asps is under their lips; 14 whose mouth is full of cursing and bitterness; 15 Their feet are swift to shed blood, 16 destruction and misery are in their paths, 17 and the path of peace have they not known. 18 There is no fear of God before their eyes.”

Avoid men and women who fit this description.

Previous Time for GOP Establishment (and Trump Supporters) to Unite Behind Ted Cruz
Next Which Blacks Are Supporting Trump?

In 1955, an unmarried pregnant University of Wisconsin graduate student left her home and traveled …