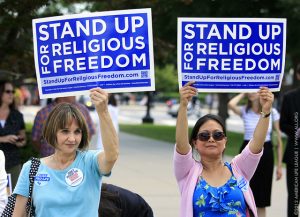 The Trump administration created a new division in the U.S. Department of Health and Human Services in January called Conscience and Religious Freedom to protect the constitutional rights of medical professionals with religious or moral objections to killing unborn babies or performing “gender reassignment” surgery.

Now the administration has gone further by forming a Religious Liberty Task Force to protect religious individuals and groups whose beliefs conflict with government regulations. From the Washington Times:

In October, Attorney General Jeff Sessions issued a directive outlining a broad interpretation of religious freedom protections. It provided support for employers making hiring decisions based on their faith or objecting to providing health insurance for birth control.

The task force will follow up on that directive, Mr. Sessions said Monday. It will facilitate Justice Department compliance with the memo; facilitate coordination with it across government agencies; and reach out to religious organizations for feedback and develop new policies and strategies to protect religious freedoms.

“A dangerous movement, undetected by many, but real, is not [sic] challenging and eroding a great tradition of religious freedom,” Mr. Sessions said announcing the task force. “There can be no doubt it’s no little matter. It must be confronted intellectually and politically and defeated.”

For the previous administration, constitutionally guaranteed First Amendment rights seemed to have been secondary to expanding “free” or low-cost (for some) social services.

For example, the Obamacare contraception mandate required employers to include drugs that could induce abortions in employees’ heath coverage. Churches and some religious organizations were exempt, but other employers who oppose abortion had to comply.

The for-profit Christian retailer Hobby Lobby had to take its case to the U.S. Supreme Court, where it prevailed. The secular organization March for Life had to file a lawsuit and won an exemption from a law that contradicted their mission to save unborn lives.

4. Americans do not give up their freedom of religion by participating in the marketplace, partaking of the public square, or interacting with government.

Constitutional protections for religious liberty are not conditioned upon the willingness of a religious person or organization to remain separate from civil society. Although the application of the relevant protections may differ in different contexts, individuals and organizations do not give up their religious-liberty protections by providing or receiving social services, education, or healthcare; by seeking to earn or earning a living; by employing others to do the same; by receiving government grants or contracts; or by otherwise interacting with federal, state, or local governments.