The U.S. Officially Withdraws From This International Council, Calling it Biased, Hypocritical, and Self-Serving 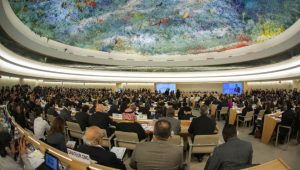 U.S. Ambassador to the United Nations Nikki Haley made a televised announcement next to Secretary of State Mike Pompeo. She said the U.S. is “officially withdrawing from the UN Human Rights Council,” and added that “this step is not a retreat from human rights commitments. We take this step because our commitment does not allow us to remain a part of a hypocritical and self-serving organization that makes a mockery of human rights.”

Haley pointed out the anti-Israel resolutions passed at the U.N. this year alone. The Council passed five resolutions against Israel in March, including resolutions centered on adherence to previous resolutions deeming Israeli settlements and the Golan Heights illegal, a resolution on the “Palestinian’s right to self-determination,” and a resolution to ensure “accountability and justice for all violations of international law in the Occupied Palestinian Territory, including east Jerusalem.”

On the body’s corruption and hypocrisy, Haley said, “If the Human Rights Council is going to attack countries that uphold human rights and attack those that abuse human rights, then the U.S. should not provide it with credibility.” She cited Venezuela, China, Cuba, and Democratic Republic of Congo on the council. “Look at the council membership, and you see an appalling disrespect for the most basic rights.”

Pompeo said, “The Human Rights Council has become an exercise in shameless hypocrisy, with many of the world’s worst human-rights abuses going ignored and some of the world’s most serious offenders sitting on the council itself. The only thing worse than a council that does almost nothing to protect human rights is a council that covers for human-rights abuses — and is therefore an obstacle to progress and an impediment to change.”

The Trump administration warned the Council to reform its anti-Israel agenda shortly after President Donald Trump was inaugurated. Media reports for over a year have been predicting the U.S.’s withdrawal.

Prime Minister Benjamin Netanyahu took to Twitter shortly following the announcement, praising the U.S. for “their courageous decision against the hypocrisy and the lies of the so-called UN Human Rights Council.”

Netanyahu’s office released an official statement thanking the Trump administration and Haley for their support for Israel at the U.N. “Israel thanks President Trump, Secretary Pompeo and Ambassador Haley for their courageous decision against the hypocrisy and the lies of the so-called UN Human Rights Council. For years, the UNHRC has proven to be a biased, hostile, anti-Israel organization that has betrayed its mission of protecting human rights.”

The prime minister continued: “Instead of dealing with regimes that systematically violate human rights, the UNHRC obsessively focuses on Israel, the one genuine democracy in the Middle East. The US decision to leave this prejudiced body is an unequivocal statement that enough is enough. Israel welcomes the American announcement.”

Previous IG Report — Imagine This Level of Bias During the O.J. Simpson Case
Next If America Wants to Be Energy Dominant, We Must Do This