Trump’s ‘Abysmal’ Poll Numbers? What About Those of Merkel, Macron, May and Trudeau? 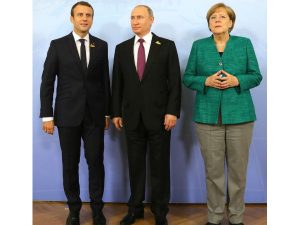 About a year into President Donald Trump’s first term, the jury for much of the country and for most of the major media has returned its verdict: Trump is a failure. Trump is incompetent. Trump cannot lead. Trump has no legislative victories. Even former President Jimmy Carter said he had never seen a president so maligned in the media. Meanwhile former President Barack Obama all but compared Trump to Hitler.

Trump endures a nightly beating from the cast of late-night comedians who take turns calling Trump racist, sexist, dumb, inarticulate, overweight, overwrought and, of course, clueless. His reported consumption of 12 Diet Cokes per day provided material for the comics’ writers. Nothing seems to be off limits, not even first lady Melania’s choice of White House Christmas decor.

Based on the beating Trump endures daily from a hostile “news” media, coupled with the nightly drubbing at the hands of Stephen Colbert, Jimmy Fallon, Jimmy Kimmel et al, one could reasonably assume that Trump’s approval ratings must be among the worst any leader could have. Trump got pounded by much of the left for his decision to move the American embassy in Israel from Tel Aviv to Jerusalem. Never mind every president since 1995 has promised to do so.

Trump got hammered for backing Judge Roy Moore in the Alabama Senate race. Trump first backed Moore’s Republican primary opponent. When Moore won, Trumped switched his support to him. But when several allegations came out about Moore’s alleged sexual misconduct, Trump called on him to drop out “if the allegations are true.” The Republican National Committee pulled its endorsement and funding. Trump then did a 180, presumably fearing the loss of a Republican Senate vote in a chamber that is only 52-48 Republican versus Democrat.

Democrats used the allegations against Moore to remind voters of the “Access Hollywood” tape in which Trump made crude remarks about women and fame.

When the Rasmussen poll put Trump’s approval rating at 46 percent a month ago, comedian Jimmy Fallon quipped: “Did you see this? Trump just went on Twitter and bragged about a poll showing that he has a 46 percent approval rating. Really? That’s like posting a math quiz on the fridge where you got a D-plus.”

But how many Trump haters know that his “D-plus” is still better than the grades of leaders of other important countries?

Take Germany’s internationally respected Chancellor Angela Merkel, the leader of her party since 2000 and the head of the federal government since 2005. According to The Times of London, the approval number for her and her party just three weeks ago was an all-time low of 29.2 percent: “Angela Merkel’s poll ratings fell to an all-time low yesterday after the breakdown of talks on forming a coalition government as the German president, Frank-Walter Steinmeier, stepped up efforts to avoid new elections.”

How about France’s President Emmanuel Macron? According to the U.K.’s Daily Express headline in October, “Emmanuel Macron Loses France’s Trust: Poll Shows Majority Questioned Have No Faith in Him.” The Express reported: “The majority of French people — 54 per cent — ‘do not trust the head of state to fix the country’s social and economic problems,’ according to the Elabe poll for Radio Classique and Les Echos. … His current approval ratings, however, pale in comparison to his high post-election ratings, when some 60 per cent of French voters expressed satisfaction with their new leader.” Recall the zeal with which some in the U.S. media greeted Macron’s election. Time magazine reported: “An untested whizkid has shot to power as President of France in his very first election campaign, crumpling older, hard-bitten veterans in his wake. … Aged just 39, Macron is France’s youngest leader since the famed French emperor Napoleon Bonaparte, who took power at age 35.”

Then there’s Britain’s Prime Minister Theresa May. The Telegraph reported last month on a poll by ORB International: “It shows that two in three people disapprove of the way the Brexit negotiations are being handled. … Some 44 per cent of the public backed her at the start of June, but after she lost the Conservatives’ parliamentary majority in a snap election that she called, the figure dropped to 34 per cent. It is now just 26 per cent.”

Finally, look at the poll numbers of Canada’s Justin Trudeau. According to Bloomberg Businessweek, his numbers are down significantly from when he was elected: “Two years into Trudeau’s first term, a polling aggregator run by the Canadian Broadcasting Corp. shows his support at 37.9 percent, down eight points from a year ago — still strong in Canada’s three-party system.”

Yes, Trump’s numbers are low — for now. But other leaders on the world stage are doing worse, in some instances far worse. So before much of the country and the media write Trump off as a failure, how about we try just a little perspective?

Previous WATCH: What Liberal Doug Jones Will Have to Do if He Wants to Represent the Interests of Conservative Alabama
Next Declassified: Did Ambassador Nikki Haley Just Prove that Iran Violated U.N.Resolutions?