A convoy of vehicles drove from Murrieta, CA, to Phoenix, AZ, on Saturday to stage a protest at Senator McCain’s office against the surge of illegal immigrants crossing the nation’s southern border. About 100 people were holding signs on the sidewalk at 22nd Street and East Camelback Road where the Arizona Senator maintains an office. The convoy was heading to Oracle, AZ, where a recent protest had taken place to block a busload of undocumented children a couple of weeks ago, yet the bus never arrived.

Pete Santilli, of Guerrilla Media Network, attended the protest, carrying his trademark bullhorn and challenging the career politician to come out of his office and talk with him. Eventually the group made its way into the lobby of the office building to the senator’s office door. A security guard tried to convince the group to leave the premises. Several plain-clothes Phoenix police officers observed the protest but did not intervene. Eventually, Santilli and the group decided to leave the building in respect to the restaurant that was about to open for the day.

Santilli cited the CREST Act, that Arizona Senators McCain and Flake co-sponsored, which contains legislation that could put “whistleblowers” in jail as well as citizens who identify DHS busses that are transporting immigrants.

You’re all going to jail as a result of what was passed yesterday if you ever identify a bus again.

Santilli believes that John McCain is complicit with this administration’s lack of border enforcement policy.

The convoy is making its way towards Austin, TX to bring its message of securing the border and deporting the immigrants back to their countries of origin.

Amazon Pulls Book That Discusses Problems with the ‘Transgender’ Movement 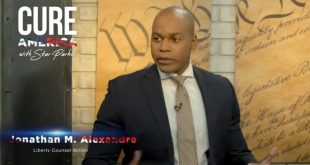 WATCH: Do Christians Have a Duty to Push Back Against Tyranny?

On a recent episode of Cure America with Star Parker, she and her panel of …