What? ESPN Pulls Announcer Because His Name is Similar to This Confederate General’s 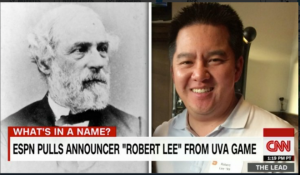 ESPN has been working hard for several years to establish itself as just another sermonizing member of the liberal media, most audaciously by hailing “Caitlyn” Jenner with an award for “courage” in 2015 for facing down such tortures as the disrespectful use of “incorrect pronouns.” Soldiers who lost their lives in combat hadn’t a fraction of Jenner’s bravery, according to their judgment.

Now, ESPN has shown its true colors, which is to say: The people there are idiots. In the wake of the media’s Charlottesville feeding frenzy, it reassigned a college football announcer named Robert Lee away from covering the University of Virginia football game against William and Mary on Sept. 2. Even liberal sports junkies like NBC’s Chuck Todd tweeted: “This is stupid. Sorry. Someone’s PR team is way too sensitive.” As everyone now knows, Robert Lee is Asian-American.

When the story broke, some suggested it was too obviously brain-dead to be authentic. Surely, it was a parody.

Then, ESPN made it even better by defending this moronic decision. An executive put out a statement to New York Magazine and Huffington Post contributor Yashar Ali that said: “This wasn’t about offending anyone. It was about the reasonable possibility that because of his name he would be subjected to memes and jokes and who knows what else. … No politically correct efforts. No race issues. Just trying to be supportive of a young guy who felt it best to avoid the potential zoo.”

The “potential zoo” here is all in the fevered brains of the ESPN brass. When we watch college football games, we rarely know the names of the announcers. And we care about knowing even less. But what if the public were to know? Stop the presses! This just shows how hypersensitive they are to racial issues. As the story broke, longtime ESPN anchor Bob Ley tweeted, “Rather worried my employee ID/pass may not admit me in the AM.” A perfect response.

Some liberals suggested this doesn’t show ESPN is liberal. It shows ESPN is a “cynical corporation” trying to distance itself from any hint of a political controversy in social media. But the outcomes are the same. The left is dictating its terms to another national network.

Then, ESPN made it better still. Its president, John Skipper, declared that the network’s “good intentions” were “hijacked” by the “personal agenda” of Clay Travis, who broke the story for Fox Sports.

So Fox Sports is to blame for ESPN’s nuttiness. On “Tucker Carlson Tonight,” Travis shot back, saying: “This is the problem with ESPN and their leadership. They talk to us like we’re a bunch of idiots and imbeciles, and sell crap. … This is not true.”

College football will go on, but what lingers is the notion that sports is almost a secondary matter at ESPN. The idea that sports is an escape from politics is disparaged as almost criminal in the hyperventilating Trump Era. Demonstrating you are “woke” — actively marching on the “right side of history” — is the path to job security. On the other hand, expressing conservative views on air or on social media gets you canned, as proven by a straight line from Rush Limbaugh to Mike Ditka to Curt Schilling to Britt McHenry.

Taking ESPN to the left can’t look like a wise strategy, as the network’s subscriber base has declined from a peak of 100 million households in 2011 to less than 87 million now. But other liberal networks have shown that their business imperatives are less important than audaciously demonstrating their “courage” and commitment to the “social justice warriors.”

Previous Abortion Advocates Definitely Won’t Like What South Carolina’s Governor Just Did
Next What Still Unites Us?