While Democrats Were Enjoying the Government Shutdown, Trump Decided to Lead — Not Cave 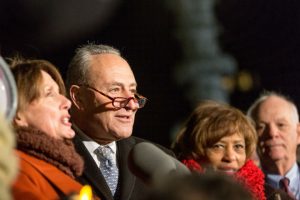 The media is having another field day at the alleged expense of President Donald Trump.

Supposedly, per what we read, the president “caved,” “folded,” or “lost” in the government shutdown showdown with House Speaker Nancy Pelosi.

Except it’s not true.

Our elite spends so much time inside the Washington, D.C., bubble that they’re sealed off from any sense, connection or interest in what this nation is about.

Ours is a democracy. Remember? In the end, the people decide. Trump, who these same pundits love to call “dictator,” has not forgotten.

It’s the president’s job to lead, to put on the line what he believes is best for the nation. But ultimately, the people decide.

Sometimes at the first try, the message doesn’t get through. It means you try again a different way. This is exactly what Trump is doing.

In the words of General MacArthur: “We are not retreating. We are advancing in another direction.”

The president must negotiate through the fog of a hostile media and now with a Democratic congress more interested in inflicting political damage on the president than implementing policy that serves our nation.

Trump tried to move negotiation forward after the shutdown by offering to extend DACA protections — protection against deportation of those who arrived illegally as children — and also for immigrants with temporary protected status.

What was response from Democrats? No response. Counteroffer? None.

Why? Because the Democratic objective is inflicting damage, not advancing solutions for the American people.

Democrats sat back, actually enjoying the shutdown, while headlines like this from NBC ran: “The behavior of this administration while denying 800,000 people paychecks was as imperious as Marie Antoinette’s apocryphal offer of cake.”

Of course, no federal worker is being denied a paycheck. All pay will be made up. But it’s also important to keep in mind that federal worker compensation is on average higher than the private sector. According to the Congressional Budget Office, federal employees earn on average 17 percent higher in salary and benefits than private sector counterparts. And according to Bureau of Labor Statistics data, private sector employees are three times more likely to be fired and five times more likely to quit.

All in all, federal workers have a pretty cushy situation. One of the risks is a periodic shutdown disruption. But again, they receive back pay and overall receive good compensation to cover these rare inconveniences.

Now, rather than “caving,” Trump is making a new effort — advancing in another direction — to get the nation’s business done. He’s signed an order to re-open the government for three weeks to open the door for negotiation.

In his remarks, the president noted, “in the last two years ICE officers arrested a total of 226,000 criminal aliens inside the United States.” In each of the last three months, he said, there were “60,000 apprehensions at our southern border.”

President Donald Trump deserves credit for courageous leadership regarding the need for a wall on our southern border to serve our security interests.

If he had a good faith negotiating partner in congressional Democrats, we might be able to get somewhere.