Larry Elder: Why Does the Left Keep Lying About What Trump Said After the Charlottesville Rally? 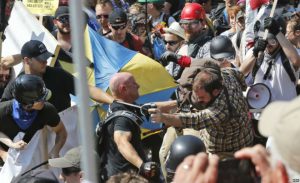 During a 2008 interview with then-Republican vice presidential candidate Sarah Palin, ABC’s Charlie Gibson asked whether Alaska’s proximity to Russia offered Palin unique “insight.” Palin responded, “They’re our next-door neighbors, and you can actually see Russia from land here in Alaska, from an island in Alaska.”

Fey as Palin: “You know, Hillary and I don’t agree on everything …”

Poehler as Clinton: “Anything. I believe that diplomacy should be the cornerstone of any foreign policy.”

Fey as Palin: “And I can see Russia from my house.”

Two things: First, there are places in Alaska where one can, in fact, see Russia. A Conde Nast travel website put it this way: “You could argue that this bit of cartographic trivia didn’t make Palin an authority on geopolitics, but it’s factually correct: Russia and Alaska are close enough to make eye contact. On a clear day, you could climb a hill on Cape Prince of Wales and maybe make out mainland Siberia, just fifty miles away.” Not close enough? Alaska’s Little Diomede Island in the Bering Sea lies within easy eyeshot of Big Diomede Island, part of Siberia and the easternmost point of Russia. The two islands are separated by the international date line and a mere 2 miles of ocean.

“Almost three-quarters of the American population falsely attributed the statement to Palin. And much of the blame, it appears, goes to late-night political comedies, such as ‘The Colbert Report’ and ‘The Daily Show.’ After controlling for other factors, including demographics and media use, heavy viewers of late-night TV comedy had a (higher) probability of believing that Palin was the first to say, ‘I can see Russia from my house.’ … Perhaps more alarming, neither knowledge nor traditional news media use helped correct this misperception related to Palin. In fact, heavy traditional news media users were nearly 14 percentage points more likely than light users to think Palin was responsible for the quote.”

CNN’s Don Lemon, while covering a story on the recent mass shootings in New Zealand, said, “Nobody has forgotten — nobody has forgotten — what he (Trump) said after that deadly white supremacist riot in Charlottesville.” Lemon played an edited clip of Trump saying: “You also had people that were very fine people on both sides. You had people in that group — excuse me, excuse me. I saw the same pictures as you did.” Similarly, Chicago Mayor Rahm Emanuel referred to Trump’s Charlottesville response to blame him for the Jussie Smollett hoax. Emanuel said:

“The only reason Jussie Smollett thought he could take advantage of a hoax about a hate crime is for the environment — the toxic environment — that Donald Trump created. This is a President who drew a moral equivalency between people who are trying to perpetuate bigotry and those who are trying to fight bigotry. … When you go back to Virginia, this is a person who said, and I quote, ‘There are good people on both sides!’”

The problem is that Trump said no such thing.

In his widely misquoted press conference three days after Charlottesville, Trump said there were “very fine people” on “both sides” of the issue of whether it is appropriate to display Confederate monuments in pubic locations. Here is what Trump said: “Excuse me, they didn’t put themselves down as neo-Nazis, and you had some very bad people in that group. But you also had people that were very fine people on both sides. You had people in that group — excuse me, excuse me. I saw the same pictures as you did. You had people in that group that were there to protest the taking down of, to them, a very, very important statue and the renaming of a park from Robert E. Lee to another name.” In case there was any doubt, Trump, in response to another question, said, “I’m not talking about the neo-Nazis and the white nationalists, because they should be condemned totally.

The question becomes, Why are so many Democrats and members of the media seemingly unaware of what Trump really said? Many know exactly what Trump said and what he meant. But the lie serves a purpose. It advances the Trump-is-racist narrative.

Previous Slavery, the Holocaust, and Abortion: What Were We Thinking?
Next You Won’t Believe Who’s Defending Christian-Owned Chick-fil-A