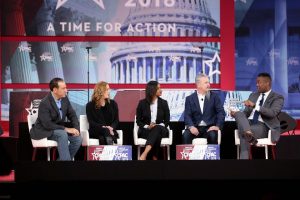 As we churn through primary season, laying the framework for November’s elections, we’re seeing the emergence of a new face of the Democratic Party — more progressive, more left wing.

Amidst all this, what might we expect from blacks, Democrats’ most consistent voting bloc? In 14 presidential elections since 1964, Democratic candidates captured an average 88 percent of the black vote. But blacks generally don’t fit the new far-left profile.

Ninety-two percent of black Protestants say they believe in God as described in the Bible, compared to 70 percent of Republicans and 45 percent of Democrats.

But it’s not just religious attitudes that raise questions about black monolithic affinity for the Democratic Party.

In the Pew Religious Landscape study published in 2014, 36 percent of historically black Protestants described themselves as conservative and 24 percent as liberal.

You might say that these responses regarding the role of government explain why blacks vote disproportionately for Democrats.

But that’s not correct.

Pew reports in addition to 47 percent of all black Democrats saying they attend church at least once per week, 74 percent say they pray daily, and 76 percent say religion is “very important” in their lives.

So data that Pew reports for historically black Protestants seems to be a reasonably rough sample of black attitudes in general.

When 36 percent identify as conservative, and when 27 percent say government assistance to the poor does more harm than good, yet on average, 88 percent of blacks are voting for Democrats, something is amiss.

Voting Democrat is not written in black genes. From 1936 to 1960, the black vote for the Republican presidential candidate averaged 30 percent. In 1956, 39 percent of blacks voted for Dwight Eisenhower.

Black voting behavior has far reaching implications, as America changes demographically into a country less and less white. In 1980, 88 percent of voters were white. In 2016, 70 percent were. This trend will continue.

Republican Party outreach to blacks has ratcheted up considerably since the Obama years.

If Republicans can succeed in courting these church-going black Christians, we could see a political realignment in the country that will change profoundly America’s political landscape.