Archives: The Horrors of Kermit Gosnell 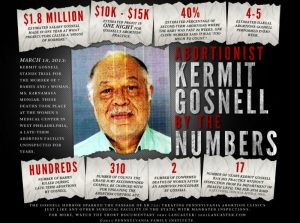 One year ago, on March 18, 2013, the trial of abortion monster Dr. Kermit Gosnell began in Philadelphia. Two months later Gosnell was convicted on three charges of murder, 21 felony counts of performing illegal late-term abortions, and 211 counts of violating the 24-hour informed consent laws.

Gosnell’s convictions really just reflected the tip of the iceberg of what was going on in that clinic. Until inspectors showed up in February 2010 as result of investigation into suspected illegal drug prescription use, Gosnell’s facility operated uninspected for 17 years. According to the Grand Jury report, the last state inspection, before the 2010 raid, had been in 1993.

Anecdotes of those who worked there suggest the scope of murder, illegal abortions, abuse of women – mostly low income minority and immigrant women – was far beyond what could be adequately documented to stand up for the trial.

The years that Gosnell committed his atrocities with no regulatory oversight, and the challenges to get national media attention to his trial once it began, should provoke extra vigilance today to address the issues involved that still are not getting adequate attention and the extent to which similar abuses are occurring elsewhere.

At the conclusion of the Gosnell trial, the chairmen of the House Judiciary Committee and the House Energy and Commerce committees wrote to Attorneys General and leading health officials in all the states.

Attorneys General were asked whether “state and local officials are being stymied in their efforts to protect the civil rights of newborns and their mothers by legal or financial obstacles that are within the federal government’s power to address.” State health officials were asked how they regulate and monitor abortion clinics to protect the health and safety of women.

We’d like to know the results of these inquiries and how this information can be used to create better policies for protecting women and children.

My colleagues find in their investigations around the nation that Kermit Gosnell was by no means one of a kind. There are more. And, to our dismay, irresponsible and inhumane behavior continues regarding the treatment of women, particularly low-income minority women, in these facilities.

The Grand Jury that investigated Kermit Gosnell speculated why he operated so long without getting attention: “We think the reason no one acted is because the women in question were poor and of color, because the victims were infants without identities, and because the subject was the political football of abortion.”

We must assure that the crimes that Kermit Gosnell committed are prohibited in federal law because they are incompatible with the most fundamental principles of decency of this country.

The Born-Alive Infants Protection Act was signed into law by President Bush in 2002 – after passing in the Democrat controlled Senate unanimously. It outlaws the murder of infants born during late-term abortion procedures.- what Gosnell was doing.

But the law is basically symbolic. It is just a warning shot, because it invokes no criminal or civil penalties when violated. Yes, it’s hard to believe that although the federal government recognized, finally, the humanity of every child once it arrives in the world, there is no penalty if that child is not protected from death by murder or intentional neglect.

In the memory of the souls of babies killed by Kermit Gosnell and others, and in the name of the decency of this nation, this should be changed. The Born-Alive Infants Protection Act should be revisited and both criminal and civil penalties included for the intentional destruction of any newborn infant.