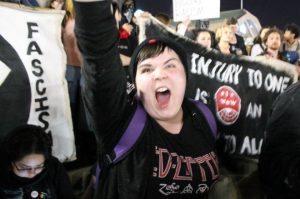 Sometimes, for those of us who are constantly reading statistics and poll results, something that you didn’t expect to see stands out — a number that makes you think the future will not be what you have been expecting.

My latest sighting of such a number was in a March 12 New York Times report on a poll of college students sponsored by the American Council on Education, the Charles Koch Foundation and the Stanton Foundation. It asked students about free speech on campus — whether it is allowed and whether it should be.

College and university campuses have been transformed over the past half-century from the zone of our society most tolerant of free speech to the zone least tolerant.

The percentage of schools with restrictive speech codes has been declining, thanks largely to the Foundation for Individual Rights in Education, but speech restrictions are still the norm, not the exception. Their stated purpose is to prevent speech that is “offensive,” an inevitably subjective standard, especially to those thought to contribute to “inclusion” and “diversity.”

What I found most striking — the numbers that stood out for me — was the difference between men and women. Among men, 61 percent favored free speech. But only 35 percent of women did so. That’s a result I certainly hadn’t expected.

That percentage is of particular concern because women now make up the majority of college and university students. They appear to be a preponderance of the campus administrators who administer and enforce schools’ speech and sexual assault codes, at a time when administrators outnumber teachers in higher education.

Historically, speech restrictions have been opposed by disadvantaged groups — civil rights advocates, labor union organizers, left-wing radicals. Now, as the Times gingerly notes, those students who most value free speech are from “groups historically or currently in positions of power.” Historically, perhaps, but not currently. It is left-wing and liberal orthodoxies and policies of racial quotas and preferences that campus speech restrictors are attempting to shield from comments anyone deems “offensive.”

Psychological studies over many years conclude that women tend to prize agreeableness and consensus, whereas men tend to seek out conflict and competition. One can easily imagine evolutionary explanations for this group difference, which, of course, is not apparent in every individual.

Female students’ willingness to subordinate free speech to political values is disturbing in a time when habits of mind and behavior developed on campus tend to leach out to the larger society.

That has been apparent in the behavior of Silicon Valley firms such as Google and Facebook, which have imposed campus-like standards in censoring material on YouTube and Facebook feeds. Their corps of recent graduates have often labeled anodyne conservative themes as “hate speech” while granting full access to such bigots as Louis Farrakhan.

This attitude was on display when Google fired engineer James Damore for circulating a memo arguing that the company’s efforts to achieve gender equality were ineffective. Google executives Sundar Pichai and Susan Wojcicki inaccurately accused him of saying women are inferior. His real offense: saying things that were politically incorrect.

The liberal bias of Silicon Valley, like the left-wing tilt of the universities, is not in doubt. It is evident in the controversy over whether Donald Trump’s 2016 campaign consultant Cambridge Analytica used Facebook data to influence voter attitudes.

That’s seen as illegitimate by many of the same people who hailed Barack Obama’s similar use of Facebook data in the 2012 campaign as a brilliant, creative initiative. Obama’s director of data integration and media analytics recently revealed that Facebook execs candidly admitted “that they allowed (the Obama campaign) to do things they wouldn’t have allowed someone else to do because they were on (Obama’s) side.”

Those who have welcomed women’s greater opportunities and increasing achievements have assumed that a less male-dominated world would be more welcoming and free. The campus poll and Silicon Valley practices suggest that it may turn out to be at least a little more Orwellian.