‘You Shall Not Murder’: Why We Need Righteous Leaders for Righteous Laws 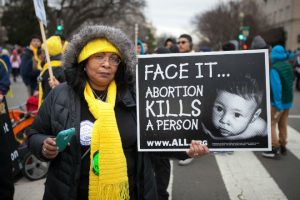 The legalization of abortion was a tremendous error on the part of our Supreme Court. It should have never happened. Once the door was opened and our nation considered it a constitutional right, many people chose to have an abortion only because it was legal. Forty-five years after the 1973 Roe v. Wade decision, more than 60 million unborn babies have been brutally murdered.

Righteous laws are very important. They make all the difference in the world. They clearly help people in their thoughts, perspectives, and in making decisions with regards to a given issue. So, the need to have righteous leaders who wisely make righteous laws is vital – it is absolutely critical to everything in life.

Too often, both young people and adults, in seasons of immaturity or difficulty, have made decisions to do things that were unwise in the moment. And often, later, these persons tremendously regret their decisions. Many, if there had been some kind of roadblock in place like – a law against it, would never have made those choices.

God clearly speaks to the issue of life in the His Word. He wants everyone to honor life. One of the Ten Commandments says “You shall not murder.” This means that no one is to take the life of innocent persons. In what situation is it permissible to purposely ignore and disobey what God clearly tells us not to do? Clearly, there are no such situations, and that includes abortion.

All righteousness flows from God. Every word in the Bible is righteous and right. If a society bases its laws on the Word of God, it helps to establish a righteous community. And God’s righteousness is good for everyone. So, if we are wise as a nation, we will continually seek to put righteous leaders in office who know and reverence the Word of God. We will endeavor to support leaders as they make righteous laws for our land, addressing issues such as the sanctity of life.

Sometimes people say, “I’m against abortion, but I don’t want to make it illegal because I believe in a woman’s right to choose.” Let’s look at this point of view. Consider a few questions. Why would someone be personally against abortion? If it is a good thing, it should be fully supported. Why was abortion against the law until 1973? Why do so many of those who have had one try so hard to hide the fact? If abortion is good, shouldn’t we be very upfront about it, support it, and talk openly about it? If you personally believe that it’s wrong and destructive, why would you support it for others but not for yourself? These and many other questions should help us to see that there is much deception and misinformation about the issue of life in our society.

God has spoken, and if we are to honor Him, we are to accept and stand on His Word. He has told us, “You shall not murder” (Exodus 20:13). He has also told us “Choose life that both you and your descendants may live” (Deuteronomy 30:19). Believers should not support what God has clearly said is wrong. Let’s choose to get on God’s side. Let us pray fervently that God would put more and more righteous leaders in office. Let us pray fervently for our leaders, that they will seek to honor God in their decision making.  And let us pray and believe God for the ending of legalized abortion.

Joseph Parker serves as the pastor of St. James A.M.E. Church in Leland, Mississippi, and the Director of Outreach and Intercession with the American Family Association. He has been in the ministry for almost 40 years and hosts the radio broadcast, “The Hour of Intercession,” on the Urban Family Communications Radio network.

The God of Israel said, the Rock of Israel spoke to me: He who rules …